On the morning of December 28th 2020, in Phu Tho Province, Z121 Factory (under the General Department of Defence Industry – TC CNQP) held a launching ceremony of the peak emulation “Accomplishing deeds, dedicating to Party” to welcome the National Party Congress XIII and the 75th anniversary of Viet Nam’s first General Election Day (January 6th, 1946 – January 6th, 2021).

Lieutenant General Nguyen Manh Hung, Secretary of the Party Committee, Political Commissar, Chairman of the Emulation and Commendation Council of the General Department of Defence Industry, attended and directed the launching ceremony. Attending the launching ceremony were representatives of leaders and commanders of the units in the emulation section “Manufacture of bullets and trade in industrial explosives”, representatives of the local authority and more than 300 officers, employees, workers of Z121 Factory.

At the launching ceremony, Senior Lieutenant-Colonel Chu Viet Son, Secretary of the Party Committee, Chairman of 21 Chemical One Member Limited Liability Company (transaction name of Z121 Factory), stated: Z121 Factory was honored to be selected by the General Department of Defence Industry to hold the ceremony, therefore, all officers, employees, workers of the Factory promote the spirit of solidarity, making efforts to well perform the emulation with the theme “Accomplishing deeds, dedicating to Party”. Accordingly, from January 1st to February 2nd, 2021, Z121 Factory will focus on implementing the following contents and targets: Building determination and a high sense of responsibility for its cadres, employees, workers in the agency or unit; excellently completing political tasks,  attaching special importance to quality assurance, production schedule of Defence products and focusing on fireworks production, ensuring diversified quantity, quality and designs; strong unity, strict discipline, absolute safety and well-organized operations.

Speaking at the launching ceremony, Lieutenant General Nguyen Manh Hung affirmed: The selection of Z121 Factory by the Party Standing Committee and the Emulation and Commendation Council of the General Department of Defence Industry opened the high phase of emulation campaign, gave confidence in officers, employees and workers of the Factory that they will be exemplary, pioneering in fulfilling their responsibilities, bringing the spirit of peak emulation to spread widely throughout the General Department. In order for the emulation to be highly effective, the Z121 Factory needs to do well in propaganda and education, making each cadre, employee, worker motivated and determined to emulate correctly with exemplary, proactive and creative actions. Meanwhile, based on the content and emulation criteria, collectives and individuals need to be concretized into a practical action program, suitable with reality; to focus on renewing forms and methods of organizing activities to gather momentum of an exciting emulation right from the first day. The process of organizing the emulation phase, it is necessary to do well in detecting, fostering, building and replicating advanced typical, new models, good practices; timely praise and reward. After the launching ceremony of Z121 Factory, the Political Department of the General Department of Defence Industry needed to learn from experience and deploy for units in the General Department to organize the launch before January 5th, 2021. 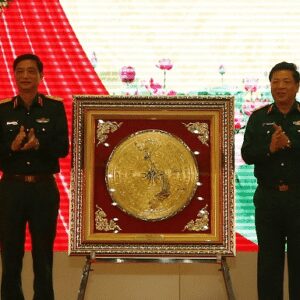